Situated to Bordeaux-Montussan, in 15 minutes of the vineyards of Saint-Emilion (Libourne) and the Médoc, Château la Moune proposes you a favoured hosting in luxury guest house. Five bed & breakfast rooms of charm and five reasons for taking advantage of an unrivalled stay: a situation outside the city, your well-being guaranteed, your intimacy protected, a refined comfort and a French gastronomy. And of course, the best fee is guaranteed to you for all the bedrooms (breakfast “brunch” served till noon, privative spa just for you) and for the excursions (wine tour…)

For the XIIIth century, the counts of Brach were known as Lords of Montussan. Moune, in the village of the old coaching inn, would date from the same period. It is an old noble house situated in the valley of the Laurence, not far from the castle of Taillefer. It was attacked during the religious wars. Pierre de Brach writes in 1572: « (…) de mille fantassins de qui les estendarts plantés dedans mes champs bouffaient de toutes parts*. »

Ronsart and Montaigne stayed there. Then the house belonged at the XVIIIth century to the family of Bonnefon, who possessed big properties in the parishes of Beychac and Montussan. They were seized by the Revolutionary government and sold in seventeen lots as national domain in the month of brumaire of the year III of the Republic. Sir Labre bought the noble house and the first lot at the price of 28 200 gold francs. This property passed then to mister de Frémont, then by alliance to mister Leymarie, his son-in-law.

Pleasantly situated, surrounded with lawn and with English gardens, Moune and its wooded hundred hectares got then harvests of 70 tons. 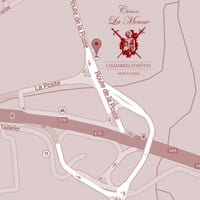